Back in 2001-2005,  I suffered the loss of several loved ones, both families and friends.  Before then, I sometimes marveled how I had not experienced the death of anyone I cared about and I was nearly 50 then.  I knew that would end, and it did as friends died from freak accidents (falling on ice in a church parking lot and having a bone fragment reach the bloodstream–RIP Ruth) to dying while sleeping and choking (RIP Earl), to the death of my godmother from heart disease, my mother from dementia from a terrible head injury to my father to a stroke he suffered while we were on the phone–and so on.

All of this emotional and body memory is being resurfaced by the death of my only sister last week.  I remember grief, what it feels like (shock, anger, grief, disbelief, pain), what it tastes like (tears), what it sounds like (choking, crying, silence). And then the permanence, the inability to touch the loved one anymore.

I wrote a lot of poetry about grief before then because of childhood losses that did not involve death, during this time, and afterwards, for my sister was diagnosed with terminal illnesses, one after the other after the other.  She lived an amazing 15 years after the first terminal diagnosis–truly amazing.

But I rarely wrote directly about the one who died, except for about my best friend Susan who died young, before age 40, from colon cancer.  We were such close friends I was shattered.  When someone told me I should get over it, I snapped and wrote a very harsh poem titled NOTOVERIT, full of profanities.

You may have heard that writers used everything in their life to write, and that is true of me, but not in a direct fashion. I write sideways poems.

Sideways?  I usually wrote about the death of a spouse or a divorce, telling my dear husband it was how I could deal with the grief, to write about it sideways, obliquely.  Since we are still married, he just gave a puzzled look.  But it helped me to write about grief in a way others could understand without battering me further.

This poem, “Where You are Not,” was written to explore the empty feeling of not being able to touch, to feel, to see the loved one anymore. I am blessed to have my spouse with me in my daily life, but grief is grief I think, and while I could not yet write about the many others since they came too close together, I could fictionalize my losses and take poetic license.

I really appreciate Esthetic Apostle for publishing this poem in their June 2019 issue. 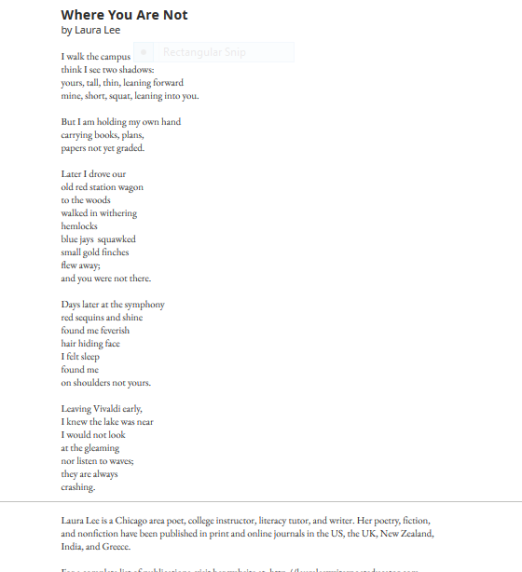 I am pleased that my poem, “The Three Month Sentence,” will be published in The Esthetic Apostle tomorrow.  I will post the link to the published poem after that day.

But for now, these are some of the words from the poem; I do need to let the journal publish the complete poem first.  But…

We had not wrapped nights
in tender sighs under stars.
Our nights
were wasted in worry.

Thank you for reading.

On a day I lost my sister, I received an acceptance of a poem about grief. I will miss my sister more than I can say; we were close in age, spoke most days, and saw each other a lot.

We laughed, we argued, we accused each other of being stubborn.  But always, we loved each other and shared decades together.

The poem, “The Three Month Sentence,” will be published in The Esthetic Apostle on October 13th.  I will post the link to the poem after that day.

But for now, these are some of the words from the poem; I do need to let the journal publish the complete poem first.  But…

We had not wrapped nights
in tender sighs under stars.
Our nights
were wasted in worry.

This was a poem written during another time of grief.

Thank you for reading. 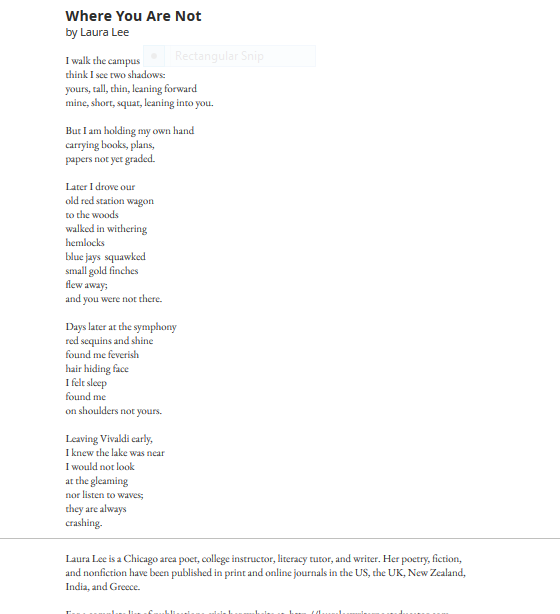 I enjoyed writing this poem, and really appreciate Esthetic Apostle for publishing it in their June 2019 poetry issue.